Adventure central since the 1960s

Being a member of Turnak is a major part of my life.

I think it was 1960, after staying at the Sydney University Ski Club (demolished a year or two later) Keith Okey and I were driving back to Sydney when Keith first suggested building our own ski club.  When the concept sank in I had to agree with him. “What a good idea!”

Liking the design of an A-frame office in Pymble, on Sydney’s north shore, Keith approached the architect, John James, who agreed to design a ski lodge for us in return for some membership rights. 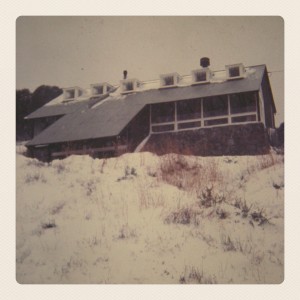 Keith spread the word among his fellow medical students and friends and we were soon getting people together and forming committees.

At this time I think it was the Kosciusko Park Trust that was in charge of the area. The trust at that time had not finalised their lease arrangements, so we only had to pay about $4 a bed for some years (now our lease costs thousands)!

They said the club had to have so many unrelated members and be a non-profit co-operative society. So we amended a standard constitution to have a membership of 73 people.

We also took out a loan from the bank to make up the difference and Ziggy Tietz (Ziggy’s Joinery) from Berridale in the Snowy River Shire won the tender and built the lodge for about £12,000.

In the early years we held many fund-raising functions such as cheese tastings, car rallies, wine tasting and bottling sales, and fashion shows.

There was no annual fee for the first few years but with rising costs for wood, oil, lease and general maintenance, we eventually had to cover these expenses with a fee.

“Do-it-ourselves” working parties have been in place since the beginning. Together with my family, I went down for the working party every Easter for the first 16 years, then about every second one for about another 16 years. Over later years I’m afraid I have left it mainly up to my daughters Sue and Jenn to represent the family – they’re younger than me!

I have spent at least one week almost every year at Turnak since we built it, staying there to ski in winter as well as some summer visits for bushwalking.

I’m sure I speak for the other members when I say I have enjoyed being a member of this club with exciting, positive times ahead to be carried on by the members and directors. I have enjoyed every minute my time at the lodge at Guthega.